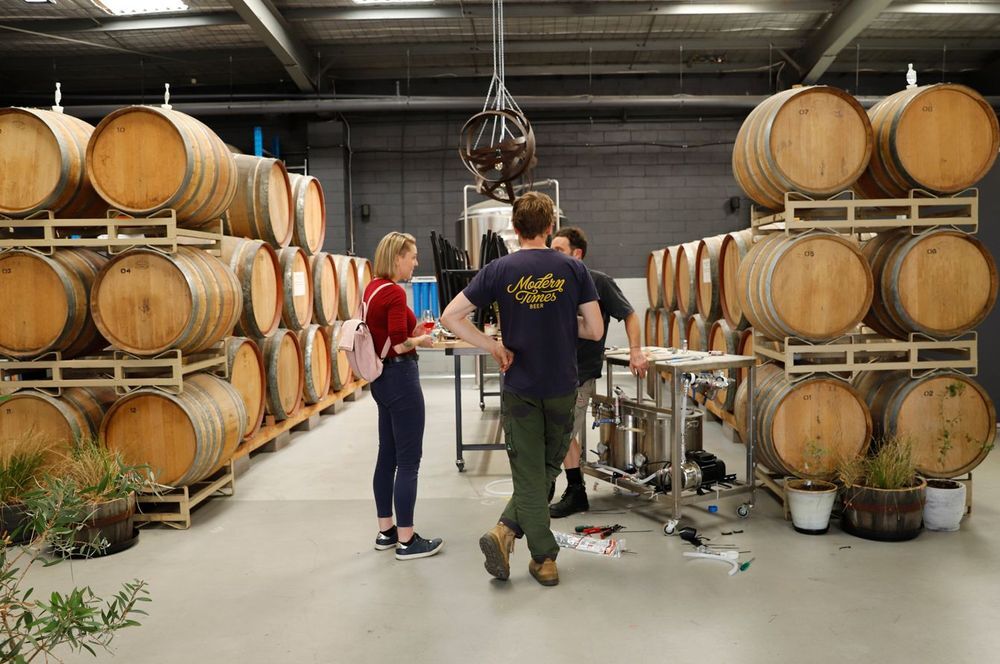 Walking into Future Mountain brewery & tap-room, you’d be forgiven for thinking that it’s been there for far longer than its few months.

With barrel-aged brews on pour that have seen 7-8 months in barrel, and an incredibly considered atmosphere, it’s evident that the two owners came to the table with a wealth of experience and a clear idea of what they wanted to achieve. Having met during their respective stints working at Boatrocker Brewery, between them Shane Ferguson and Ian Jones have spent time at Hop Nation, Temple Brewers and Hargreaves Hill (to name just a few).

After taking over a building that previously housed a mechanics, they set about fitting out the place themselves, with meticulous attention to detail to everything from the brewery set up, to the barrel program, to their yeast culture collection, to the artistic chandelier-type sculptures in the air (they’re former barrel rings, if you’re wondering).

Knowing that good things take time (just like Rome, no barrel program was built in a day), they hit the ground running well before they opened the doors to the public - brewing wort offsite, fermenting, and barrel-ageing it to allow plenty of time for the complexity and flavours to develop.

The selection on pour at Future Mountain is a constantly rotating tapestry of delicious brews, including hoppy saisons, golden sour beers (often with a nice lil spike of fruit), rye pilsners, smoked porters, and other delicious creations.

In the spirit of home-brewers around the world, the yeasts used for fermentation come from a collection of strains that have been cultivated from the leftover yeast at the bottom of beer bottles from breweries that they’ve enjoyed over the years. So far, these have been largely self-selecting - the yeast cultures that are the strongest and impart the most favourable tastes tend to be the ones that carry on and have gradually evolved into the house cultures. Once Ferguson and Jones have more time (and resources), however, they intend to look into isolating those strains - for now though, their tried and tested method has doing a phenomenal job.

On our visit out to the brewery, it was a huge pleasure to be able to taste through some of their current and future offerings. We're incredibly chuffed to have their brews in store, and we strongly recommend that you try them out!